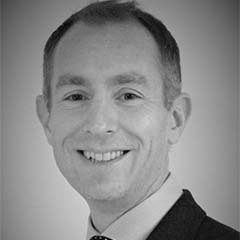 Mr Jackson gained his Medical degree at Bristol University as well as a First Class degree in Anatomy. He undertook his Ophthalmic training in the West Midlands including a Fellowship in Oculoplastic Surgery in Leicester. Mr Jackson became a Fellow of the Royal College of Ophthalmologists in 2013.

Mr Jackson has a special interest in cataract surgery and oculoplastic conditions, including eyelid problems, watery eyes and orbital disease.